Department Events:  (click on events to bring up information/packets)

The Marine Corps League was established in June 1923, during a reunion in New York, of Marines who had served in the 1st World War. The League was chartered by an act of the United States Congress on August 4th, 1937.

The League was authorized to assist and aid in presenting claims before the Veterans Administration by Public Law # 243, passed by the 74th Congress of the United States of America.

The mission of the Marine Corps League is to promote the interest and to preserve traditions of the United States Marine Corps; strengthen the fraternity of Marines and their families; serve Marines, FMF Corpsmen, and FMF Chaplains who wear or who have worn the Eagle, Globe and Anchor; and foster the ideals of Americanism and patriotic volunteerism.

The Marine Corps League is proud to support our Marines in Michigan.  We have 38 Detachments in communities across the state of Michigan.

The Marine Corps League provides funeral honors support.  This support allows the Marine Corps (Active and Reserve) to focus more of their resources on mission preparation.

One of our most critical missions is assisting transitioning Marines and their families in support of the Marine Corps’ Marine for Life program.

With our partners at the Marine Corps Association and Foundation, we produce the Marine Military Expositions including Modern Day Marine Expo, Marine West Expo, and Marine South Expo. 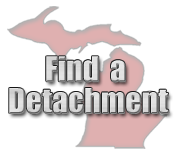 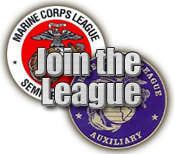 If there is not a detachment near you, call our Jr. Vice Commandant Ray Rayl at 517-262-4091 for information about being a member at large or forming a detachment in your area.